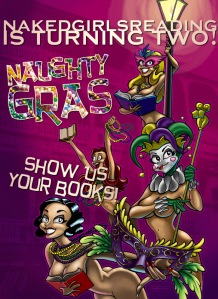 We’re celebrating our 2nd birthday and doing it the only way we know how…IN OUR BIRTHDAY SUITS!

That’s right, folks.  The literary salon that is literally sweeping the world started in Chicago two years ago.  Since then, we’ve branched out to numerous North American cities and are soon opening in London England and Melbourne Australia.  We’ve given away a Literary Honors of $500 for original writing and been recognized by independent publishers as a great force to encourage reading across the world.

To celebrate the world’s most salacious and magical literary salon we’re taking it to the French Quarter where the careers of many literary greats took root.  From William Faulkner and Tennesse Williams to Anne Rice and John Kenney Toole, we’re getting all Naughty Gras – New Orleans style.  Top it off with a Nawlin’s tradition – the annual Streetcar Named Desire “STELLA!” Yelling contest, live French Quarter Jazz by the Fat Babies and the first ever Naked Girls Dance Party and you’ve got one helluva barn burner.

This one will go down in the books as one of the best nights the Naked Girls have ever thrown…and THAT’S sayin’ something!